I graduated from business school several years ago. Before that I was a dancer (because going to biz school is the most common thing in the world for dancers to do. Sure it is). And no, not THAT kind of dancer (ha, ha HA, GEE I am not sick of that joke AT ALL); I studied ballet, tap, jazz, modern- that kind of thing.

Roughly 3 weeks into the business program I decided that perhaps this time I had jumped in over my head and I should quit.

The clincher: We had this “refresher” statistics class and I did not get something called “sigma.” It’s not really important what (stupid) sigma IS, but suffice to say it’s a pretty standard stats thing and I didn’t get it. I DIDN’T GET IT AT ALL. Which means I didn’t get ANYTHING in the stats “refresher” class. And I’m something of an A-type personality so me not getting something is a problem. People were practically falling asleep and doing the questions upside down and backwards to give themselves a challenge and I was all: WAIT! Slow DOWN! Oh my god… so sigma is like ADDING? MULTIPLYING? It’s like dividing letters? How did I get accepted into this crazy program? Ahhh! I THINK I’VE FORGOTTEN HOW TO READ!!!!!

I hated that class.

I had 2 weeks before the deadline to get my deposit back. After that it wouldn’t matter if I died of sigma-itis because my parents would kill me for losing so much money.

From here I did a few things:

There was only one thing to do: Leave my entire future… up to FATE. I decided to run for Student Council. If I got elected I would stay in the program. If I didn’t get elected I would quit.

And hell, why not leave my future up to fate? Never mind that I had spent months studying for the entrance exam, writing entrance essays and collecting reference letters as well as heaps of time finding a place to live, buying textbooks, and giving myself pep talks (you can DO it, Shauna! Yes you can! Just walk into the classroom… walk… walk NOW… 1, 2, 3, go! Doggonit woman, PEOPLE WILL LIKE YOU!”). Nah, I figured the best, most logical course of action for this last crucial decision was to wing it.

The things I did to make my folks proud.

And you know what? Damned if I didn’t get elected to Student Council. The stars came into alignment**, I stayed in school and gosh darnit, I GOT sigma. I can’t say that I remember a damn thing about it now, but I got it at the time and I used it and I made friends and I graduated and… allow me this one more time:

The dogs have big challenges too: Here is a picture of Kayloo trying to figure out how to get from where she is on the grass to where I am on the blanket without walking (bit of a lazy boo, this one). 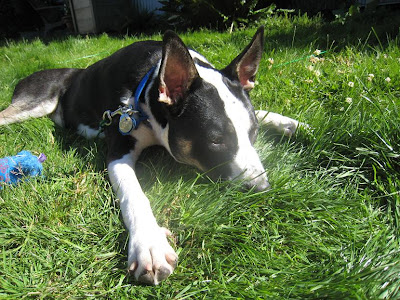 * I’m not saying there’s anything WRONG with a Bachelor of Fine Arts degree. I love my degree. I would like to marry my degree (but I’m already married, and that would be complicated). I’m just saying that at that particular fragile moment in my life the world was crashing down and even if I had, say, a Law degree I’d only have been able to secure a part-time job weeding gardens… for my grandparents … and just by the skin of my teeth (they love me but they’re tough).
** FYI I don’t recommend waiting for stars to come into alignment to help you make a decision. What if it’s cloudy, or you have to make a decision at, like, 2 o’clock in the afternoon when it’s too bright to see the stars at all?

One Response to “(Stupid) Sigma”