A Letter to the Asshole Who Abandoned My Dog

This is a letter to the asshole who abandoned my dog at the dump when she was 4 weeks old.

I have been writing this letter in my head for a few months now and I’ve considered writing it from a few different vantage points:

All these let you off the hook more than I would like, so I’m going to go with this:

You’re a grown up, you most certainly DID know better and karma’s a bitch (I AM trying to get a bit more zen).

This is my dog Kayloo*: 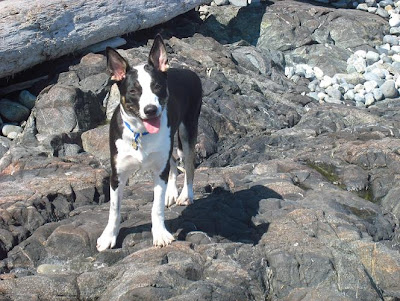 She is about 10 months old now. She is gentle and loving, she farts like a trucker and she likes nothing more than to chill out on her cushion knowing that the rest of her pack is a few steps away.

A bit on how Kayloo’s life started out:

She was born. 3 or 4 weeks later the human (or one of the humans) associated with her life picked her up, took her to the dump and left her to fend for herself. In October. In Canada. She was there for a few days until someone found her and brought her to the vet clinic. This is what she looked like.

I am trying to be level-headed and keep myself from saying things like WHAT THE HELL KIND OF ASSHOLE LEAVES A PUPPY AT A DUMP!!! Seriously, what BRAND of asshole to you have to drink to go and pull something so incredibly horrible?

EVERYONE within a 100 kilometer radius would have had a better idea on what to do with a puppy than you did. I have taken the liberty of coming up with a (much shortened) list. You could have:

You could have even done any one of these incognito since clearly you did not have the BALLS** to own up to the fact that you didn’t want to take care of YOUR RESPONSIBILITY in the first place (and YEAH, she WAS your responsibility. Maybe if you were a little more conscientious about your dog and you got her fixed this wouldn’t have happened in the first place. Oh, but I guess that would mess with your side job BREEDING AND SELLING dogs that you pass off as PURE BREEDS. Heaven forbid you should have to deal with a mutt).

Ever hear of a guy named Gandhi? He said, “The greatness of a nation and its moral progress can be judged by the way its animals are treated.” GANDHI IS NOT IMPRESSED.

To give an indication of what we are dealing with here, the American Humane Association estimates that 9.6 million animals are “destroyed” in the US EVERY YEAR (The Humane Society of the US estimates 3-4 million). That is the cumulative effort of thousands of careless individuals such as yourself. Do you know what “destroyed” means? It means killed. Based on these numbers, thousands of dogs that aren’t even a year old and are PERFECTLY HEALTHY could die every day because YOU ARE AN ASSHOLE.

That’s right. Every single dog that is euthanized in the ENTIRE WORLD is now your fault. That’s what happens when you do stupid shit.

You’re a grown up
It makes me sad to think of how horrible your parents, grandparents and/or teachers must have been to teach you that something so deplorable was an ok thing to do… Whoa, hang on! This isn’t your kindergarten teacher’s fault! This is YOUR fault. If you’re old enough to get in your van and DECIDE to head over to the dump, you’re old enough to make a better choice.

You knew better
Don’t even think of trying to blame this on rap music or video games.

Karma’s a bitch
The next time you stub your toe, or have a bad dream or open up your Ikea box and realize that you are missing a CRUCIAL bolt, but you are already half way through building it so you have to take it all apart (which is impossible) and drive 2 hours back to Ikea to get the bolt and then 2 hours back home only to realize that you’ve put one of the panels on backwards… remember this: You deserve it.

Stick that in your pipe and smoke it.

Kayloo just came into the room looking for Mickey because she likes to do everything that he does. She is doing her best to swallow a Kong whole and every now and then she drops the Kong on his head to keep him interested in the game.

I would like to finish off this post with one last message to my Boneheaded Puppy Abandoner:

I didn’t say the message was a mature one. 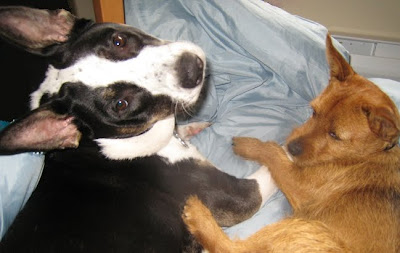 Follow up: I have received a lot of feedback about this post. First of all, thank you for your passion and for sharing your stories. If you haven’t already checked out the comments section, I would highly recommend it. For better or worse I have learned about “burn piles,” dogs left on the side of the road and in dumpsters, and caring for dogs discarded after fights and experiments. I have been shocked more than a few times today, and I’ve been googling like mad! Thank you for educating me and for engaging in this discussion. I look forward to many more chats to come!

I’ve started Kayloo & Friends to collect your stories. I hope you’ll check it out and join our pack!